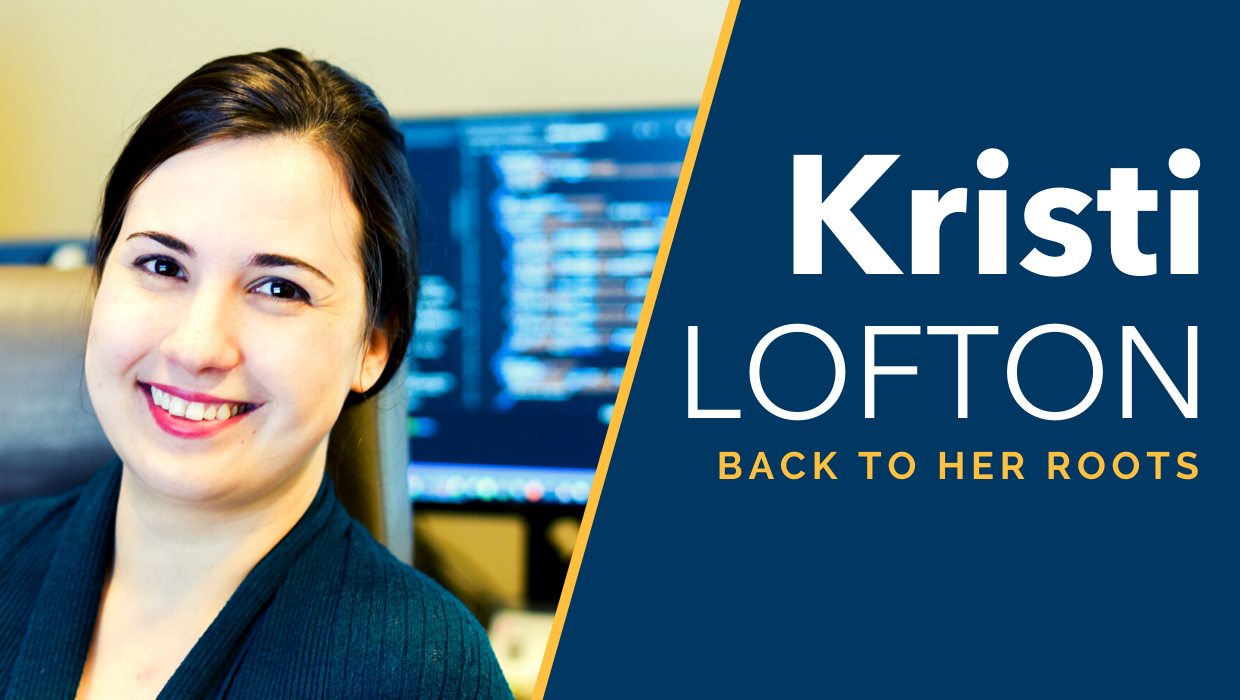 Kristi Lofton: Back to her Roots

If you're interested in our 2020 Code 1.0 or Web Programming Classes, Apply today.

Let's get back to Kristi.

This time last year, Kristi was working at a veterinary clinic, working as a Vet Tech, manning the front desk, and managing the accounts. In her "spare time", she found herself tinkering with their administrative systems.

Until her current job at The Seam, Kristi's problem wasn't that she didn't enjoy her job- she just felt like she could be doing more: "Everyone has to figure out their life", she told me. "I was always interested in a lot of things- but not interested enough.”

You see, Kristi had mastered the pivot long before she made the shift from Vet Tech to IT. Kristi Lofton grew up in Hughes Arkansas, just 40 minutes outside of Memphis. She worked for her father during farming season, helping with the soybeans and wheat their family grew.  Her father and mother still own the farm to this day.

After graduating high school, Kristi left the farm for New York. She attended Colombia University, and majored in neuroscience. You know, no big deal. She followed her studies with a brief stint as an EMT, and by the time she had made her way back to Memphis, she had narrowed down her career choices to just two: vet school or pharmacy school.

That's when her brother-in-law (a programmer) decided to throw her a curveball. "He was like, 'listen-  I want you to try something new. I think you'd be good at it'." He told her about the growing need for coders, and the local schools geared towards training them. Schools like Tech901.

I asked Kristi why she chose Tech901, and she was frank with me: "With Tech901, I could keep my job". The clinic supported Kristi, moving her to the night shift so she could attend morning classes at Tech901. Code 1.0 wasn't easy- as Kristi puts it, "Code is 100% what you put in". But the girl likes a challenge.

The Seam met Kristi through a mock interview coordinated by Tech901's career services, and they liked her right away. When the job offer came shortly after, Kristi found herself making another big decision: "Do I want to keep going down the path to grad school, or do I want to pursue this new path- this career in coding?”

When we met up recently, Kristi told me she hasn't once questioned her decision. She's flourished during her time with The Seam, thanks to her drive and the support of her co-workers. "When it comes to my team, I can't overstate how helpful and approachable every member is. Having co-workers you can lean on if you're having trouble is priceless."

But what exactly does Kristi do?  What is Agricultural Tech (See? I told you we'd get back to it)? If you're interested in web programming or code, you'll want to pay attention to this next part.

The Next Tech Frontier 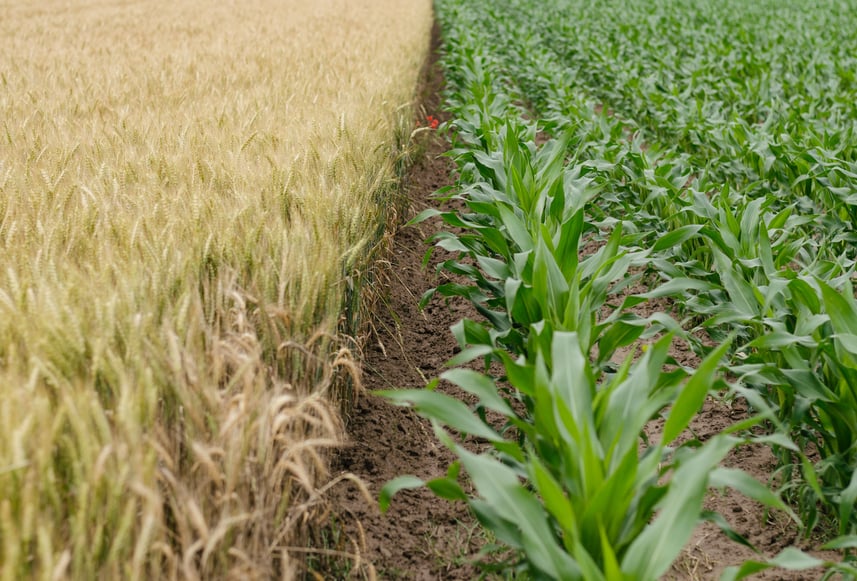 Photo by Henry Be

Let me get right to it: agriculture is the next technological frontier: for Kristi, for Memphis, and for the global market.

Those fields of peanuts, cotton, and soybeans, along with the generations of farmers who cultivate them, have long been subject to traditional methods when it comes to production and exchange.

But these traditions also include file drawers full of paper receipts and physical records, which means it’s sometimes difficult to follow a product from its origins to its end-user.

Cue Agricultural Technology, often shortened by in-field players to “AgTech”. AgTech is a growing field focused on addressing issues at every stage of the agricultural process using modern technologies. From seed and plant health, to issues of transparency and sustainability: the goal of AgTech is to make agriculture more efficient, more sustainable, and more transparent.

That’s where software engineers like Kristi have a part to play: in the records, trading, and sustainability efforts of modern agriculture. Famers are able to grow more efficient and sustainable crops using monitoring technologies. The advent of blockchain means we can track cotton from the field to the store you'll eventually purchase that sassy t-shirt from.

The AgTech Market is indeed booming- and more importantly, it's making its home right here in Memphis, Tennessee.

Memphis in particular has been on top of the AgTech boom for the last few years. Uniquely situated in both farming and city spheres, Memphis is at an advantage when it comes to those businesses developing around global agriculture markets.

For example, Agricenter International has brought in $524 million to the Mid-South region annually. The Seam is revolutionizing global trade transparency, with over 8 billion in platform trades. Indigo Ag intends to bring 700 new jobs to Memphis as their workforce continues to grow over the next three years.

As businesses like The Seam and Indigo Ag continue to invest in Memphis, the demand for locals with tech training will continue to rise. They'll need more coders, and more developers, willing to learn on the job. You know, people like Kristi.

Kristi Lofton is particularly well suited to the local AgTech boom. Growing up, there was a lot of talk about inheriting the family farm- but Kristi knew that wasn't what she wanted to do. And while Kristi may have left the farm, she hasn’t left agriculture entirely- in fact, she’s returned to it with her work at the Seam. 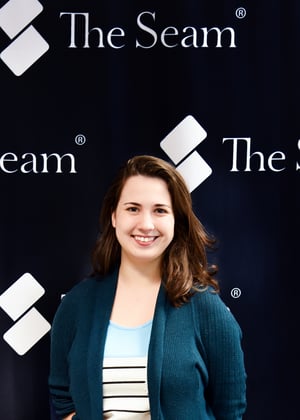 As of November 5th, Kristi will have been working at the Seam for one year. Kristi beams with engagement talking about her day to day work.

She loves her office, and her team.

She loves her job.

At The Seam, Kristi is responsible for maintaining web applications for cotton trading and peanut shelling. She also builds/ maintains the web applications for The Seam's growing sustainability initiatives (a passion project of hers). "A day in my life consists of getting to my desk in the morning, looking at issues that have been assigned to me through our work portal, and working on solutions." Some of these issues take her 30 minutes- some take weeks. For the tech nerds out there, she work mostly with SQL, .NET (C#), and Angular (Javascript/HTML/CSS).

She's just coming off of peanut-shelling season (or for Kristi, troubleshooting season), which means she’s getting started on the next big project: cotton sustainability efforts in collaboration with the U.S. Cotton Trust Protocol.

AgTech is a whole new frontier for Kristi- one she finds challenging, but also familiar. She's had to learn a totally new way of thinking and problem solving. "I think my neuroscience background helped with that", she laughs. "I mean, I majored in problem solving.”

But Kristi is also a Mid-Southerner. She grew up on the farm. She knows how farmers get work done. Now she can help them do more.

If you’re interested in the course Monét took that lead to her IT Career, apply for IT Foundations...
Read More

Ryan Burrell: Wired for IT

If you’re interested in getting started in IT, I’ve got good news for you: Tech901 has some ...
Read More

If you’re interested in jumpstarting your IT career, the time is near. Our 2022 Class Schedule is...
Read More