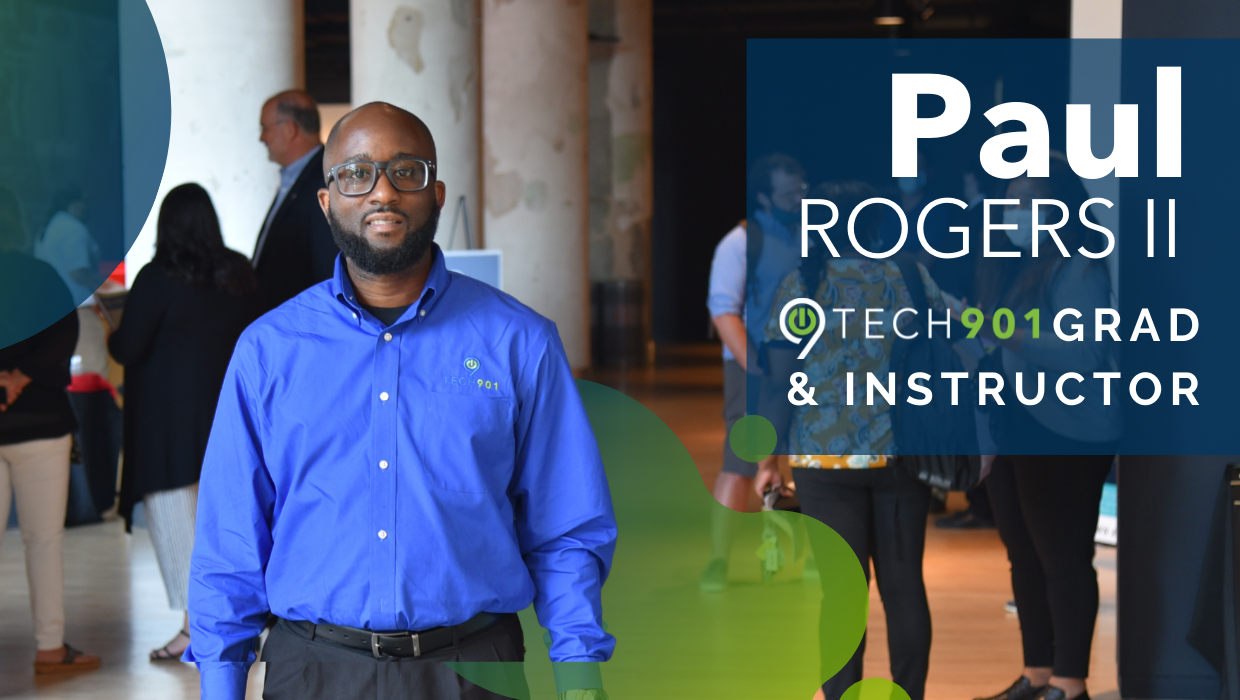 In just under a year, and in the middle of a global pandemic, Paul Rogers II earned 4 CompTIA certifications (CompTIA A+, Networking +, Security +, and Project+), started a new career in IT, and joined the Tech901 instructional team.

But who is Paul, and what made him decide to pursue IT training during the pandemic? 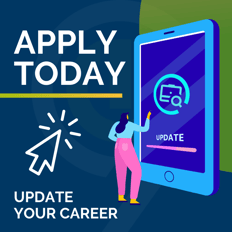 First let me say that Paul was not the only person to consider his career options during the pandemic. The American workforce saw significant shifts in employment-many people chose to upskill, earn new skills and certifications, and even change careers. In 2021, the US tech industry is projected to earn 245,514 new jobs.

But let's talk about what happened with Paul specifically.

Paul grew up around IT. "My dad had his own computer company here in Memphis. I learned a lot from him", he tells me. As a teen, he and his brother would help their father with his IT business, helping the technicians set up computers for clients.

My dad was in a position to give back to his community. I want to be able to do that for my community as well.

After graduating with a degree in accounting from the University of Memphis, Paul helped out a bit with his father’s business. He was a waiter. He was a financial advisor. "I didn’t like accounting, and I didn’t think I could go back to school and get a computer science degree. I didn’t know about IT certifications at that time, so I just started trying different jobs". But nothing really felt right until he got into teaching.

Paul taught math to K-12 students for nearly 5 years: "I love teaching people things, and building those relationships". During that time, he also earned his graduate degree in education, and volunteered his time after school to tutoring and local community programs.

"My fraternity created a program to mentor young men, teaching them life skills, basic financial advice, that kind of thing. "

As the father of three young girls though, Paul knew he needed to make some changes. He needed more time with his family, and more money to support them.  He had some experience with IT, but it wasn't until his barber told him about Tech901 that Paul realized he could start his IT career in as little as 14 weeks.

STARTING YOUR IT CAREER (DURING A PANDEMIC)

Paul joined his first Tech901 class, IT Foundations, in January of 2020. "When I signed up I was still teaching. I knew it was going to be tough - being in school all day, tutoring, and then coming to classes. But I knew I was taking a step back to take a huge leap forward."

He wasn't expecting to make the jump from in-person instruction to virtual classrooms. No one was, really.

Halfway through the IT Foundations course, the pandemic forced Paul, his classmates, and his instructors online. The instructors set up private labs for the students, so they could still get that "hands-on" experience.  Demonstrations were streamed virtually, and certification exams were made available with online proctoring.  "Nothing really slowed me down," he tells me. One day he was in class, and the next he was at home, balancing his studies, his children, and pretty soon, his new IT job. He continued his lessons, earned his A+ certification, and even started a job in IT during the first quarter of 2020.

What kept me going, especially during that first class, was my goal. I had a vision for what I was trying to do.

Paul found his IT first job, Repair Technician at Flex, through Tech901's student job services. To be honest, this first job was a step back for Paul. He had been a senior teacher in the Memphis education sector. But Paul had a plan. “I enjoyed the hands-on part of it. I had just learned to breakdown laptops in class, and that’s what they needed me to do. It was entry-level, but I knew that was my first step towards my new career goals.”

In Spring, Paul took the next step in his training, and completed the IT Networking course. By Summer, he was ready for the IT Project course, and a new job as a Help Desk Technician, troubleshooting customer issues for American Homeshield. “Now I was using my background in customer service and education to help people with their tech issues. I was also still taking classes with Tech901, and building my skillset.”

“I was working in IT during the day, and then would come to my classes in the evening which was great - most of my classmates in my IT Networking and IT Security classes were like me - they had jobs in IT but were looking to go to the next level in their training.”

By winter, Paul had finished off his IT Professional Track with his final class and certification: IT Security.

FROM STUDENT TO INSTRUCTOR

Even after he had finished his courses at Tech901, Paul kept in contact with his Tech901 and classmates.

For me, networking is just as important as the skills I learned in Tech901

Of course, Paul’s instructors took notice of his accomplishments, and when the need for a new member of the instructional team came, they were quick to reach out and ask him to apply for the position. 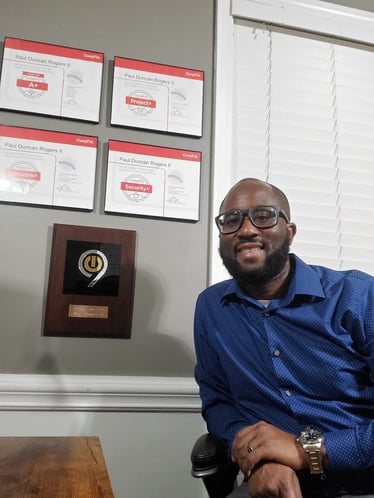 He got the job of course. After all, Tech901 is the perfect mix of his talents: teaching and IT. "I've been in our students' shoes. I know what it takes to balance a job, a family, and taking classes with Tech901."

These days, Paul is teaching the same course he was a student in just a year ago: IT Foundations.

As an instructor, he's in the perfect position to help new trainees through the course, because he's done it. In fact, he did it four times.

When you talk to Paul, it’s clear he knows what a student needs to succeed in IT and at Tech901. “I know how to teach. I have all of this IT knowledge. I can use my strongest skillsets - but this time I'm teaching adults.” Being an instructor at Tech901 allows Paul to combine his passion for helping people with his growing IT Career. "It feels good to be excited about going to work", he tells me.

Paul may be new to teaching tech, but he has valuable insight into what students need in order to succeed at Tech901 - after all, just last year he was where you are right now.

If Paul’s story got you motivated, we’ve got great news: our next classes are starting soon. Check out the schedule page, and start your application with Tech901 today.

Tags: Instructors, IT Hardware Tech, IT Growth, IT Careers, IT Industry
Back to Blog

Beginning September 19th, Tech901 will once again partner with the Boys and Girls Club of Greater...
Read More