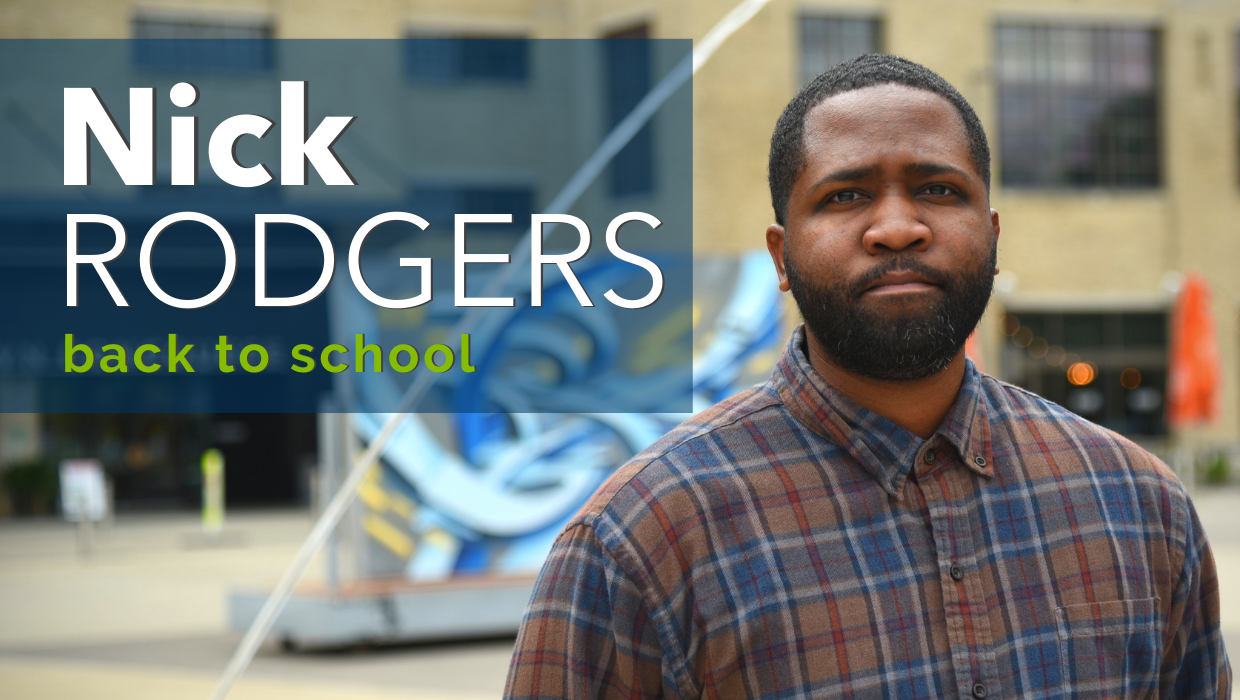 Nick Rodgers: Back to School

If you're interested in any of the courses Nick has taken, click on one to learn more. Begin your IT career with our online application.

If you ran into Nick Rodgers today, it's likely it would be on the grounds of his alma mater. He's an IT Support Associate, providing IT support for administrators, teachers, and students in the Shelby County School system. Nick's job includes a few different schools, one of which happens to be his old high school.

During the school year, Nick helps operate a ticketing system, dealing mostly with projector, internet, and software issues. In summer, he preps for fall- updating computers, rolling out new software, and replacing what needs to be replaced. He's busy with the school system's IT needs year-round, which is just how he likes it.

Nick Rodgers got the IT training he uses on the job though Tech901. But he also values integrity and hard work. He's a guy who enjoys fixing problems, and he's loved computers since he was a kid. Nick was a perfect fit for Memphis IT.

Before Nick started his technical training with Tech901, he had already pursued a number of paths- he's pretty well-rounded. "I couldn't pick just one thing in college," he smiles wryly. He studied psychology and writing. He was interested in video games, and even started training as a firefighter at one point. But nothing seemed to stick.

His career started off in the public sector. He worked for the federal government, interviewing people in need of medical support. That led to his job with Shelby County Vocational Services, helping at-risk populations and people with disabilities find employment. Eventually, he found himself working in the Child Support Offices of Shelby County.

And while he got promoted at the job, and enjoyed doing good work, at the end of the day it just wasn't enough: "I don't like wasting time- I like to get things done". So Nick took a hard look at his interests and skills, trying to find a place where the two aligned. "I've always liked computers, so I started looking into programs. But I knew I didn't want to repeat undergraduate." So he started asking around.

"What would you recommend for someone looking to get into IT, but with no experience?"

Nick tried self-study, but his lack of familiarity with the certification world gave him pause. Which certs were worth it? What did the certification lead to? He knew he wanted the CompTIA A+, but he couldn't find training specifically geared towards the certification. "The exams cost a lot of money, and have a lot of situational questions that you have to be prepared for- and I wasn't. Not yet.”

That's when a friend told him about Tech901. Nick started with IT Foundations. The class was hands-on, challenging, and fast-paced.

"I mean, for the price, you get more than what you pay for. 12 weeks of class, and the certification tests you need cost less than if you paid for them outside of Tech901." With an instructor and schedule that kept him on track, it wasn't long until Nick got his certifications.

But now Nick had another problem: How was he going to tie together a degree in psychology, years working for social services, and a CompTIA A+ certification? He knew he might have to take a pay-cut, at least at first: "I knew that even in the worst circumstances, the job would act as a stepping stone to something down the line. What do I have to lose?".

He started working with a Shelby County School contractor, providing laptops to schools. He and his team would deliver the computers to school, and do everything on site. They were setting up programs, tracking applications, and Microsoft Office - things he had learned how to do at Tech901. He quickly moved up to Warranty Technician, where he was responsible for hardware issues. "I was replacing fans, hard-drives, motherboards- sometimes I'd have to bring in a whole new unit. It reminded me of what we had done (at Tech901)."

It wasn't long until SCS had a few direct-hire positions open, and Nick was in the perfect position to jump at the opportunity. Of course, he got the job.

With his current position, Nick cites his autonomy and a flexible schedule as some of the perks. He also notes the lack of "burnout" that he experienced at his previous positions. “I could see myself retiring from this place,” he tells me. "But I also want to know what else is out there. What else I could be doing. Where else I could be going."

Nick has gone on to continue his path with Tech901. Since his 12 weeks in IT Foundations, he's finished most of the courses Tech901 offers, including IT Security and IT Networking. He's also taken Code 1.0... because Nick is all about skill building, after all.

“Always strive to learn something new, something different", he advises me.  "As soon as you stop growing, you’re less marketable".

The Second Half of Life

Travis White is a Summer 2021 Tech901 graduate who recently landed a job at the Memphis Zoo after...
Read More