"How’s everything at Tech901 going?" he asks as we sit down.

Lawrence Dennis, 32, works as a TEKsystems contractor but he still comes by Tech901 every once in a while to make sure he's staying sharp. "Last night I was over there asking Blair (Perry, a Tech901 instructor) some questions, trying to brush up on some IT Project Management for my new role", he tells me. Looking pleased, he adds "you know, I’m the one who got Blair into Star Trek".

For the record, Blair is really into Star Trek.

I've taken pretty much everything at Tech901.

It's no wonder Lawrence Dennis is on good terms with the Tech901 instructors. He’s taken all of the IT Professional Courses the nonprofit offers:  Foundations, Security, Networking, and Project. He’s racked up most of the CompTIA certifications as well (“I’m coming in next month to take the CompTIA Security+” he assures me). 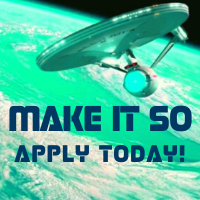 Lawrence has a lot to say about the IT training he received during his time with Tech901. His favorite class was Networking ("Foundations was the hardest!"), but he’s actively using the skills he learned in Project and Security at his current job as a Data Privacy Analyst at FedEx.

When I ask him why he got into tech, Lawrence has a pretty relatable answer: “I was tired of where I was”.

When he moved to Memphis in 2005, a family member in the area recommend a position with The Fresh Market to help Lawrence get his feet on the ground. He ended up staying with The Fresh Market for nearly 10 years, taking on more responsibilities and moving up the ranks. However, when faced with the opportunity for one promotion in particular, Lawrence says he didn't feel right about taking it.“I realized I didn’t want to work in retail anymore. I was headed for upper management, and I knew that I didn’t want that."

So when Lawrence’s brother mentioned an ad for IT training courses right here in Memphis, Lawrence knew this was a path he wanted to take.

I remember thinking- I’ve been here for 10 years- what is one year to get myself into a position to make more money? To have a completely different life?

He’d been in Memphis for over a decade, and he had seen it growing: “I live in mid-town, and I’ve seen it become what it is- this growing, modern city. ” Lawrence is quick to mention that renaissance he sees happening in Memphis- a local resurgence caused by the growth of the tech industry as a whole. Lawrence saw how the IT industry was investing in Memphis, and he knew he wanted to be a part of it.

Lawrence registered with Tech901 when it was still cold outside, and by the time the summer session of IT Foundations rolled around, he was more than ready to start learning-- even though it was a little difficult at first.

“ In [Foundations], I wasn't just learning new IT skills- I was also learning how to sit there and absorb, and I was learning to use different study sources. You have to use everything in your tool box to make it stick.”

When he finished that course, he decided to just keep going. "With your A+ certification, you're just kind of thrown into the deep end, but it was with Networking, where I was coming in with that foundation, when I decided that IT was the path I needed to be on."

Networking just made sense to me- it was so interesting to watch how it works, and comes together- getting you to the internet.

Lawrence started with his current employer last August: “I had all the certifications by then to prove I was competent- the real test was the in-person interview".

At work, his primary duties include patch governance and project management- so he’s constantly referring back to what he’s learned at Tech901 while also making sure to stay up-to-date on new trends.

Lawrence assists in the governance of assuring servers get the patches they need when they need them. “Anytime your laptop updates, it's applying patches to vulnerabilities in your security, to ensure that it can’t be exploited. Over time, they find new ways to exploit, which means they have to be patched”. He’s also got to know who’s responsible/informed about projects, and make sure it's all documented- all stuff he learned in Project and Security.

Lawrence is enjoying his position for now, but that doesn’t mean he’s content. Now that he’s got the momentum, Lawrence is doing everything he can to continue learning new things. He's using modern tech to pursue his love of music, including building his own instrumentals on Soundcloud. He's even hinted he might take Code 1.0 with us in the fall.

With his current trajectory, Lawrence tells me he’s excited about being able to pay off his college debt soon. "When my mom went to Memphis State, she was able to pay for it with a summer job and a loan from her dad. It was hundreds of dollars versus what we have today."

According to Nicholas Wyman and Forbes.com, the need for vocational/training schools in America is a dire one, especially for trades and emerging IT industries. Organizations offering concrete skills for in-demand job sectors are a cost-effective option for people like Lawrence who are looking for new career opportunities. "If everything was like Tech901- you know, pay for a class, and you’ll get these skills, this certification- it would turn socioeconomics on its head."

That's the thing- Lawrence Dennis isn't just about changing his own life-- he wants other Memphians to explore their options. He's even encouraged two of his friends to get their CompTIA A+ certifications. Now one works at Fedex TechConnect, and the other is at Green Mountain Technology. "If more people knew that places like Tech901 existed", he says, "it would change cities. It would Change Memphis."

Three Major IT Certifications that could land you a new job - Apply for Tech901!

For Dean Jones, Art is a Necessity.

As a child, music, and drawing came naturally, sparked by an uncle who taught art at a local high...
Read More