It’s never too late to learn to code

Don’t like your job? Want a great career? It’s never too late or too early to learn to code! And there has never been a better time to start a career in computer programming than now! Unless you have been in a coma or on another planet for the last few years you’ve probably heard that there is a worldwide shortage of computer programmers.

According to the Bureau of Labor Statistics, U.S. Department of Labor, Occupational Outlook Handbook, Employment of software developers is projected to grow 17 percent from 2014 to 2024, much faster than the average for all other occupations. The main reason for the rapid growth is a large increase in the demand for computer software.

Software developers are the creative minds behind computer programs. Some develop the applications that allow people to do specific tasks on a computer or another device. While others develop the underlying systems that run the devices or that control networks.

Computer programming is a challenging and highly respected field. It requires careful and organized thought to understand a problem and devise the sequence of instructions for the computer to execute successfully. Many are unnecessarily intimidated or don’t think they could ever write code (program). The fact is that it isn’t all that hard. People from all educational backgrounds, some probably just like you, are discovering that they can be successful as computer programmers. 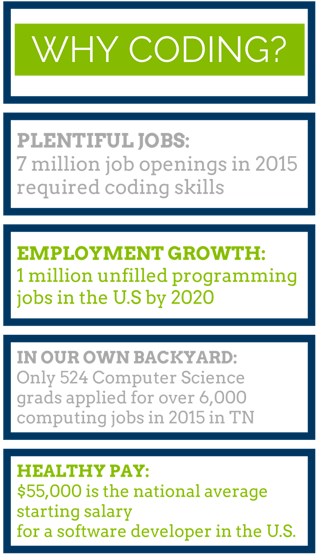 Certainly you have at some time written down instructions for someone to get to your house. This was a series of simple instructions for the person to read and execute in order to get where you wanted them to be. Well you guessed it, you’re already a programmer! It’s really the same thing as writing code or instructions for a computer to execute. Computers are not as smart as humans so the instructions are very simple and must be formatted using syntax (something like grammar) that the computer can understand. Depending on the computer language, the instructions may be as simple as goto, print, or next.

Many people think, “ I can’t be a programmer because I didn’t like math in school”. This is not true at all.  While some very specific kinds of programs require heavy math, the overwhelming majority of computer programs require no more math than simple arithmetic like adding, subtracting, and counting to 10!

When I started my career I thought programmers had to have studied math and taken all the right subjects in school before graduating from college with a degree in computer science. I slowly learned that the “right background I was looking for” had more to do with circumstance and opportunity, than it did with a person’s ability or potential. After 30+ years in the field, I have trained and hired hundreds of programmers. I had to adjust my pre-conceived notions of who could learn to program and who could not. Today programmers come from every conceivable background, young and old, from waiters to lawyers and everything in-between. Code is the great equalizer! In one particular case there was a candidate for our very challenging training program who had no prior experience or training. He worked on a used car lot and at first didn’t appear very impressive to me at all. I was going to reject him but one of my recruiters said that despite his outward rough edges and background, she saw great determination and she believed he could overcome the challenges. I reluctantly agreed to give him a try. To my astonishment, he is now one of the best programmers I ever hired! He makes enough money now to provide for his family and enjoy his hobby of flying radio control helicopters and racing drones! He recently told me he has to pinch himself sometimes to realize this is really his life now! From this and many other cases like it, I slowly realized that “background” is not always an indicator of potential. What you did before is much less important than what you are capable of doing in the future. It’s what’s inside you that counts the most.

We all have certain common traits. One of them is you have to believe in yourself to be successful. Another is that you will do better on tasks you want to do, than on tasks that you don’t. If you really want to do something well, you will apply yourself and very likely succeed. If you don’t care about doing it well, but just want the easy result, then not so much.

Don’t let anyone else tell you what you can or cannot do. It doesn’t matter how much anybody else believes in you. It only matters how much you believe in yourself.

Do you have what it takes to be a computer programmer? If you do, a new life awaits. I like to say “If you love code, then code will love you back”!

Tags: software developers, computer programming, courses, harvardx, cs50, where are the jobs, computer coding, learn to code
Back to Blog

From Construction to Coding

I’ve been in construction project management for about seven years now, after graduating from...
Read More